For much of my career, I’ve worked at home as a team of one.  Many years ago, I learned that it takes a community.  I’ve always felt one of my strengths is to both reach out when I need help, and offer help when it’s needed.  In about 2005, I started doing a lot of work with the .Net stack and discovered the forums https://forums.asp.net/.

As I was learning ASP.NET, I found myself asking a lot of questions in that forum.  The group was unbelievably helpful and supportive.  Having done a lot of Unix work previously, I’d had a lot of reprimands for incorrect questions so it was very uplifting for me. As I became more proficient in the .Net stack I started answering questions also.  My personal goal was to answer one question for every one I asked.

Though I’ve not been active in that forum for a while, it’s still a great place, and I’m proud to ultimately have been asked to be a moderator as well as achieving All-Star status, which I’m sure is based on the my 15,384 points which included my answers being marked as correct 10,200 times. 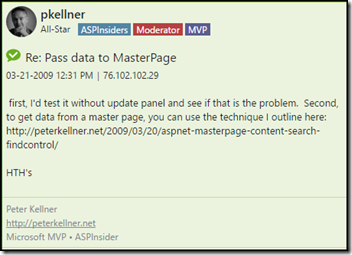 Eleven years ago, the Microsoft MVP Program must have noticed my activity here, as well as an event I’ve been the primary organizer for the past 11 years called Silicon Valley Code Camp, where we have hundreds of speakers from the community, hundreds of volunteers, many corporate sponsors and thousands of attendees all coming together to learn and share.  I believe it’s been the biggest and longest running free technology focused community event in the world.

So, what motivated me to write this post today?

I’m in the midst of building my upcoming Pluralsight video course (my 5th) on ASP.NET Core Tag Helpers.  I’m trying to explain how the HtmlTargetElement’s query selector parameter works, and I needed an example of a car model name that is shared by two manufacturers.  I found a csv file that had 9000 car makes and models but could not (based on visual scanning) figure out a model that met what I needed.

I posted my question on StackOverflow 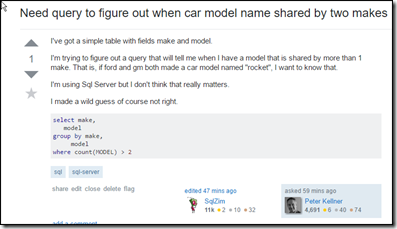 Literally within 5 minutes a user with the handle @SqlZim gave me almost the perfect answer.  After a short comment exchange, I got the perfect answer, learned something new, and had my problem solved.  Plymouth and Ford both made a model named Laser. (among about 80 other matches).

Well, back to my Pluralsight course script writing.  Thanks for listening, and most of all, thanks for being part of my community this early Sunday morning in March.