This three part series demonstrates a very simple example of using Entity Framework Code First (Version 4.3) to create a SqlServer Table and populate it with data (that is part 1).  Part 2 adds two new columns to the table a populates the data conditionally (while migrating from a non migration enabled project), and Part 3 adds a new column with a default value to a migration enabled code first project.

As it happens, I watched President Obama drive by me in San Francisco yesterday so he will be the star of the post.  The table we will use is called Presidents, and the columns we will add are Year Elected and Current.  We will obviously only have one current president so we will have to have our migration conditionally set CurrentPresident to true for Obama. 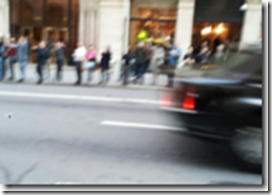 I need practice with my cell phone camera (obviously)

For those wanting the real code, the final visual studio solution after part 3, includes parts 1 and 2 information is here:

We simply want to update the table “Presidents” which currently has two columns, Id and LastName.  We want to add the columns “YearElected” and “Current”.  If the president (LastName) is Obama, we want to set CurrentPresident to true, if not false.

First thing, let’s make sure that our SiteDBInitialize (see part 1) is set to implement CreateDatabaseIfNotExists.  That code should look like the following:
Next, let’s add the columns to both our Seed method as well as the Presidents class.  For clarity, I’m pasting the complete program below (remember, this is it!)

In our case, the initializer will only be called if the database does not exist.  Let’s change the data in the database just so we know that our data has been migrated and not simply replaced.  Here is a screen shot of what I’ve changed it to (notice I’ve added an “x” to the end of each LastName).

Now, if I run this, I get an error that says I need to run migrations.  The error is as follows:

teDB' context has changed since the database was created. Consider using Code Fi

This is great!  It is telling me my model has changed and telling me where I need to go look to learn what to do.  So, after looking there, I discover (with a little digging) that I need to –EnableAutomatic.

After doing this, I’m surprised to get this error (OK, I admit I’m learning this new feature, it just came out this week) as I’m writing this blog post.

Detected database created with a database initializer. Scaffolded migration '201202171606443_InitialCreate' corresponding to current database schema. To use an automatic migration instead, delete the Migrations folder and re-run Enable-Migrations specifying the -EnableAutomaticMigrations parameter.

What I see happened is that Enable-Migrations create a new folder structure as follows: 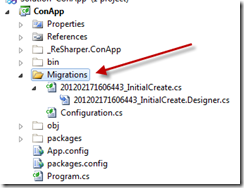 Basically, what has happened is “Enable-Migrations” did the following:

And, from that we get the message:

The Designer Code for this migration file includes a snapshot of your current Code First model. This snapshot is used to calculate the changes to your model when you scaffold the next migration. If you make additional changes to your model that you want to include in this migration, then you can re-scaffold it by running 'Add-Migration 201202171748276_AddingNewColumnsElectedYearAndCurrentPresident' again.

Now, we have some new files in our Migrations folder as follows:

This file: 201202171748276_AddingNewColumnsElectedYearAndCurrentPresident.cs has code in it that both upgrades and downgrades our database.  Very nice Microsoft!

Then, to the Up method, let’s add our custom datacolumn settings:

Not forgetting, we need to enable automatic migrations as follows in the Configuration.cs file

And you’ll get this nice output showing you the sql generated:

And when you look at the data, you will of course see:

OK, this was a little more involved than I thought it would be.  Primarily because we were going from a project that did not have code migrations enabled to one that does (I am glad I went through the exercise though).  In Part 3 (which I was not planning on doing) I’ll look at what it takes to add YAC (yet another column) to the Presidents Table now that we have Automatic Code Migrations enabled.

Hope this helps!  Move on to part 3 now.