Back in 2009, I discovered what I considered a fatal flaw in performance using LINQ2SQL with LINQ queries.  I published 2 very popular articles on this as well as discussed it with many of my peers and Microsoft.  At the time, I was told in no uncertain terms by Microsoft that this was an inherent problem and for many reasons I did not agree with, they would not be addressing the issue.  Well, now, more than 2 years later, Microsoft has addressed this exact issue in Entity Framework Version 5 and will be providing the exact fix that is needed!

Basically, as I discussed in these articles below, without compiling queries, the amount of time it takes to compile each one causes unacceptably slow performance.  That is, if you look at my graph (copied here) 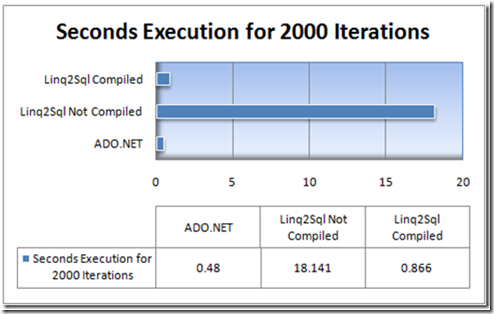 for a simple LINQ query, you can see that compiled query can be 37x faster than a non compiled, and if you read the article further, you’ll see that not compiling queries can cause the compile itself on every execution to significantly dwarf the time it takes to actually do the complete round trip including the execution to the database.

I just read on the EF blog that this fix is coming.  The full article is here: 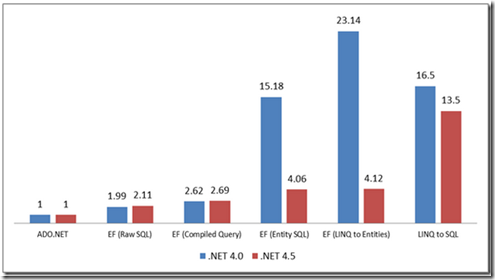 From these results, it seems that Microsoft will not improved LINQ2SQL, just EF but IMHO, that’s OK.  I’m moving my LINQ2SQL projects that are still in service to EF as should all of us be.

So, even though Microsoft kept telling me I was shouting into the wind, they totally took on behind the scenes and solved this huge problem.  Thank you Microsoft!